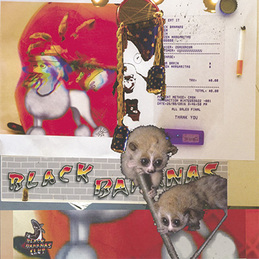 END_OF_DOCUMENT_TOKEN_TO_BE_REPLACED

RTX are splitting into Black Bananas!!! The fruit is ripe and the bread will be FRESH.

After three albums under the name RTX, Jennifer Herrema and her bunch decided to flip the script, to kick open the doors of perception a little bit . See, RTX was not Royal Trux, not a metal band,not a 70's bar band and not a toxic substance; RTX was something, all of those things and none of them and way more, including Black Bananas bubbling in a witchy cauldron of their own herbaceousbrew. The title of a song on their RaTX album detailed a bit of the recipe, taking elements often tossed aside or thrown all the way out and combining them into something new and worthwhile...a new strain of the almighty green - to feed and elevate the hungry ones.

"I'm your garbage collector
I'll turn your trash to gold
What you cast off is what I hold,
End loafs of bread, black bananas and broken crackers
Scratched records, too dark pictures and torn jeans
All the shit that rips at the seams"

Black Bananas is set for the next all-inclusive rock and roll crusade, the one that includes even and especially all the shit you don't like, woven into all the shit you can't live without. This has been the name of Jennifer's game from day one; she owns the blueprints and if you don't know by now, don't even bother to Google it, cuz understanding is an investment not an action. Jennifer Herrema is not schizophrenic nor does she don many hats. She is simply a singer and simultaneously, a pioneer of comprehensive non-exclusive opposition rock, and Black Bananas is the latest addition to the oeuvre.

Brian Mckinley, Kurt Midness, and Nadav Eisenman have been ripping and running with Jennifer since 2002, when one by one, they gathered serendipitously, borne by curiosity and the courage to be part of something new. Each passing RTX record saw them wrapped ever tighter in the burgeoning tongue of their own creation. Now, uttering their twisted slang fluently as a unified dialect, they emerge as Black Bananas.

If you wanna hedge (-fund) your bets its best to get out in front of this new national currency they are creating with Black Bananas. These are the notes of the future; with Jennifer at the helm their worth will grow exponentially. Invest!

Black Bananas first album Rad Times Xpress IV runs the gamut from gnarly odes to reality TV in songs like "My House" to future electric metallic GoGo sounds all conceived with scraps of influence from Jennifer's childhood passions zig-zagged with other currents out there, creating a sound that will take you to a specific place that only Black Bananas know how to find.

Most of all, Black Bananas is the new band in town — and they're fucking righteous.