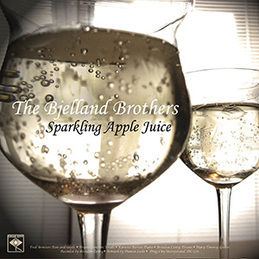 "Sparkling Apple Juice" b/w "Can We Stay With You?"

Taste of New York are a more recently documented band in the Hometown Heroes series. Formed (vaguely) in 2009, Taste of New York started as a loose, communal noise project in a three story semi-abandoned building on Avenue C, in New York City. Band members floated in and out, some from as far away as Germany, and some from as close as the second floor of said building. A few members disappeared deeper into the Lower East Side, leaving three core members, Ira Wright, Jon Thebadeau, and Cori Entelman. Jon, who did much of the singing, came to New York from Louisville, Kentucky, where he was already an important figure in the music scene. Or, in relation to this series, locally important. They soon began to write songs about the physical world around them: broken glass, cracked concrete, and rats.

Taste of New York were known for their slow, chaotic live performances, sometimes so poorly organized, that there were some shows where none of the band members even appeared. Crowds would fill a venue to watch an empty drum kit, piano, and amp for an hour and a half. And yes, there were encores. Taste of New York were truly revered, or as one of their fans described it, “always forgiven.”