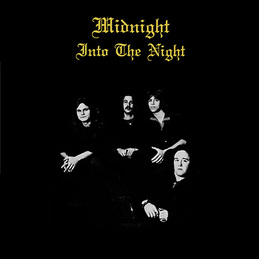 Midnight went down to the crossroads in 1974 — unfortunately, the crossroads at Olympia Fields, IL didn't have the same dark power as some of the other great rock intersections!…

Hailing from the 'burbs of Olympia Fields, Country Club Hills, and Chicago Heights, Illinois, Dave Hill (vox, keys), Scott Marquart (drums), Frank Anastos (guitar, vox), and John Falstrom (bass guitar) were all record-obsessed teenagers taking music lessons at a store called Melody Mart in Homewood, IL in 1974. After meeting, they realized that three of them went to Rich Central H.S. in Olympia Fields while Marquart was just down the road at H-F High School in Flossmoor, IL. That same year they formed Midnight, covering hard rock like Uriah Heep, the James Gang and Sabbath — but they evolved quickly, playing house parties and high school around the south suburbs in '75. By the following year, despite the band being only 17 years old, they were playing nightclubs and colleges in and around Chicago, and writing all original songs. In the fall of 1977, despite having no management or producer, the kids recorded their LP Into the Night at A-K Sound Recording Studio in Orland Park, IL — privately releasing it in early 1978 in a small edition, making it a majorly sought-after hard rock rarity today (Falstrom regularly gets offers of $100 or more for the LP). Distributed themselves (and barely promoted), the LP certainly covers all the heavy bases with a wickedly raw mix, at times sounding like proto-doomers Pentagram, but with an occasional boogie number and power-ballad as well.