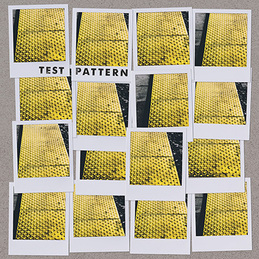 "This is My Street"

In order to get the same feel and sound, the directors organized a live performance of Test Pattern in San Gabriel, California. Fred Armisen and Bill Hader put together a band that onstage would tell the chronological story of Test Pattern, by adding band members, song by song. It starts with Fred Armisen and a guitar (“This Is My Street”), then a trio with Bill Hader on bass and Jon Wurster on drums (“Art + Student = Poor”), and then Jon Spurney on keyboards and Maya Rudolph on vocals and synth. Musicians and singers are added throughout the show, but those are they key members of Test Pattern. The last song, “Everybody’s Moving Around” is sung and co-written by Bill Hader, presented as that one song on an album not sung by the lead singer. Senon Williams plays additional bass on that one. The concert was real, as the show put the word out to anyone who wanted to go. Trying to stay true to the aesthetics of the time, they added: “80’s attire gets you best seats.”