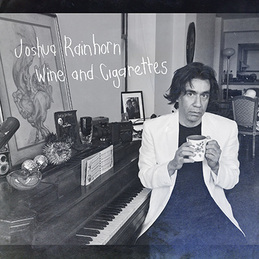 Originally from Columbus, Ohio, Joshua Rainhorn moved to the Silverlake area of Los Angeles in 1998, packing only a portable electric piano and lyric notebook into the back of his Honda Civic. His ragged/formal style required little upkeep: white suit jacket with dusty black jeans, and a reddish mop of messy hair. He found a studio apartment behind a corner cervecería and immediately got to work, writing as many lyrics as he could. He filled pages and pages with his thoughts, sometimes falling asleep while his hand continued to write into the early morning hours —  literally words from a dream state. At the time, he was so prolific, that he would sometimes write lyrics on top of other lyrics, right on the same page. To his friends, the pages in his notebook looked like tangled scribbles, often completely black with ink. To him, it was the encyclopedia of his subconscious. This was a statement he repeated many times in interviews, and later, on stage.

Joshua’s imagery evoked a world of old wine bars and coffee-stained book covers. Honky tonk music and worn out shoes. Elusive, mysterious lovers. His plan was to become a locally-revered lyricist, and it wasn’t long before his dream came to fruition. Booking a Tuesday night residency at a piano bar called Marla’s, his audience grew steadily, to the point where after only a few months of playing at the club, a line would form down the street. Fans could often be overheard saying “I hope we get to hear some of his new lyrics” and “I love his lyrics so much”. Since then, Joshua Rainhorn has never strayed far from his adopted home city. Apart from a few two-week tours up and down the Los Angeles/San Francisco corridor, he continued, and still continues, to play venues all around town. He is respected and sometimes quoted by some of the newer singers/ lyricists, and his fan base remains as loyal as ever: the very definition of a Hometown Hero.