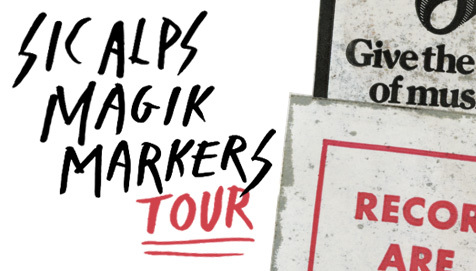 One of the joys of 2009 was our introduction of two fine bands to our roster, Magik Markers and Sic Alps. Magik Markers came forth with the horrifically amazing album Balf Quarry in May. Sic Alps released a long-playing fuzzy-pop-epic singles collection double-vinyl LP A Long Way Around to a Shortcut in August. They’re joining up on tour starting today, and they’ll also have a limited-edition six-song Sic Alps/Magik Markers tour 12” at the merch table. What better way for the band to get to know each other than to have Pete Nolan of Magik Markers and Mike Donovan of Sic Alps do a little Q&A with us for a Drag City special edition.

MD: Pete, your signature drum rolls are tight. What are you thinking about during the roll?

PN: I usually imagine that I’m surfing or something. Not that I know how to surf or anything… I know how to carve pretty good on a skateboard. The one time I tried to go surfing at Long Beach (Strong Island), there was this huge tropical storm the night before so the waves were like ten feet high. Also I had just found out that my wife (then girlfriend) was pregnant. Needless to say I got my ass kicked. So I don’t think about that kind of surfing. More like some idealized, imaginary, Endless Summer kind deal. It seems to do the trick.

MD: Pete, you’re a new father. Was your dad a rocker?

PN: No, thanks for asking, my dad was not a rocker, not even a little bit. My dad lived in Detroit in the sixties. He could have seen every band that I love. When his roommate in college played an MC5 record, he thought they were saying “Brothers and Sisters, Take out the Trash!” He’s a really nice guy, but I can’t help but feel that he squandered his place and time in history. He saw the race riots in Detroit though. I guess that’s kind of cool.

My daughter, Violet Ray, is a super rocker already. She learned how to stand by leaning on my rack tom and acoustic guitar. She also sings on my new Spectre Folk record and plays shakers.

MD: A German fellow once ranted to Sic Alps via email that he thought we had masterminded our Description of the Harbor record to sell out fast causing a hype swirl. Did anybody ever blow you shit for releasing something in too limited a run?

PN: Um I don’t know…I can’t think of a specific instance. How much of something we put out, as far as vinyl or CD goes, is usually out of our hands. I’m pretty sure that they’ve (unbeknown to us) remained in print far longer than we would have wanted or have been compensated for.

We’ve gotten all kinds of shit in our time though. Mostly from twerps that have seen us once and think they’ve got us all “figured out” or whatever. I don’t think we’ve ever, intentionally or not, been caught up in a “hype swirl.” I’m not totally sure if I know what one is. It sounds like an interesting phenomenon though. Oh wait… I think I just saw one after taking a crap just now.

PN: Amon Dull II, Yeti still does it for me. I’m sure that a dose of Vulcan’s Meet your Ghost every now and again would fire me up too.

PN: You guys sound great! What’s up with your sound system/PA that you drag around America with you everywhere? It looks home-made...is it? Can we use it too on tour? What kind of echo sound is that? Echorec? Oil-Can? Plate reverb? Well out back with a mic in it?

MD: Thanks Pete! That PA was conceived to equalize soundmen everywhere across this fair land. It was essential to our game for years, convincing the sound man to just “mic this speaker” and kick back as their job just got way easier actually. It’s not home-made but Matt did Tolex the box the power amp sits in. We’ve basically used an old Peavey PA head with two Celestian bug eye speakers (formerly of the USS Shasta) and a Silvertone amp with both guitars going thru it. Though since becoming a 3 piece unit, the PA has been in a state of flux while we experiment with new setups. Hell yes you guys can use it!

PN: You just got back from Europe... How was it? Did you see anything that you’d never seen before? Let’s hear about it.

MD: It was a fine trip and our first one playing with Noel Von Harmonson from Comets on Fire. He’s our old friend so it was a lot of laughs. One crazy thing from tour- on the way over our plane hit a massive storm that threw our 747 plane around like a cat toy. Everybody’s dinner literally hit the ceiling at one point followed by a rapid decent to evade the storm that seemed a lot like “the end”. Luckily there was a nice Persian woman sitting next to me to hold hands with (for 10 minutes).

PN: Your songs sound great on the new Sic/Magik split record you just made with us. I really think people should buy it. What do you think? It sounds like there are three of you on this one. New sound! Is this the first recording of you guys as a three piece? How come you guys decided to get bigger?

MD: Yes buy it from Yik Yak and Drag City has copies too! Yes, it’s a 3-piece lineup on those songs. Lars from the Intelligence plays keyboards on a song and Ty Segall plays on the other two tunes. We decided to go for the 3 piece in ‘08 after a lot of touring. It’s great to be able to play the songs with the bass lines and guitar solos, etc. from the records.

PN: My grandmother-in-law used to be Caesar Chavez’s bodyguard/cook. She said she’d cook Chavez’s favorite meal (Eggplant Parmigiana) for us on our first night of tour in San Jose. Are you stoked about this or freaked out?

MD: Stoked for old school cooking and thanks in advance to grandma!

PN: I don’t know if I care that much...but what are your Astrological Signs

PN: How much is this West Coast Tour gonna rule?

Check out the Magik Markers and Sic Alps on tour here: