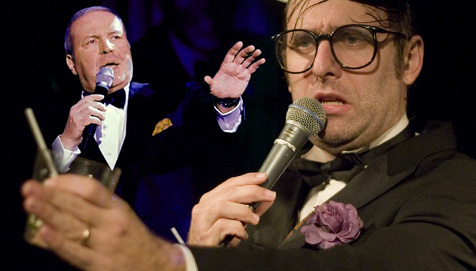 Bonnie"Prince" Billy is one buff film buff, in case you didn't know. On Thursday, January 7th at the Silent Movie Theatre in Los Angeles, the 'Prince' will present a hand-picked double feature of films that explore the wonder and the mystery of the sexier sex: A Woman's Secret and Alice in the Cities. Bonny won't be playing songs, but he'll be talking the talk of films for your very own wonderment.

In the last few years, Neil Hamburger, America's Funnyman was promoted to the World's Funnyman, but we'd like to further promote him to the Hardest Working World's Funnyman, which pretty much puts him on top! He doesn't just sit back and take credit for all of the performance artistry that has ever been put forth into the universe, as he very well could! Instead, he's humble, knowing that others have come before him and added to his craft.

On January 10th, at 8 pm, Neil Hamburger will take an opportunity to shine a spotlight and pay homage to one of his mentors, Frank Sinatra Jr. at Los Angeles' Silent Movie Theatre.

Hamburger says: "Frank Jr. has an intense stage presence unlike any I have ever encountered. Like his father, there is a lifetime of regret, disappointment, and longing in every note that comes out of his mouth -- but with a career shattered by unjustified critical malevolence and public indifference, Frank Jr.'s experiences are drawn from a completely different well. To hell with today's slovenly singer-songwriter scam-artists! If you're looking for an amazingly gifted vocalist who puts every ounce of his experience into every word he sings, Sinatra Jr. is your man."

In honor of Frank Jr.'s birthday, Hamburger has assembled this evening of rare, vintage Frank Jr. TV variety specials and film appearances! Hamburger himself will be there to present the revue and display the profound impact that Frank Jr. has had on his life.

To get purchase advance tickets to these events, visit www.cinefamily.org