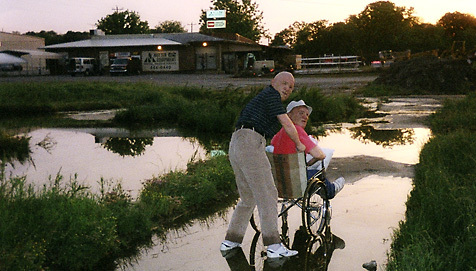 Drag City — Coming to a Theatre Near You!

Called many things (many true, some even positive!) and wearing many hats over the years (actually, once we got out of our “Cat In The Hat” phase we pretty much gave up trying), it’s possible that nothing to date has fit Drag City better and more appropriately than placing Harmony Korine’s new film TRASH HUMPERS into movie theaters across this filthy land of yours and ours. It’s not that different from booking a tour — and there’s a lot less gear involved.

TRASH HUMPERS follows a small gang of sinister, creepy, elderly peeping-toms through the shadows and streetlights of a familiar suburban landscape. They drag baby dolls around on bicycles, bust television sets with hammers, slap big fat asses while proudly chomping down on stogies, and yeah...they do some trash humping too. Their behavior makes for viewing that is as compelling as it is unbearable — images that, in classic Korine style, scorch themselves on yer mind’s eye, leaving you squinting for the foreseeable future.

As shocking as this proposition might be (us distributing movies, that is — weird new releases from Drag City should not be shocking at this point), remember (please!): we’ve been releasing DVDs for years. For instance, the Complicated Drumming Technique instructional DVD by drum head Jens Hannemann (surely you haven’t forgotten the News item above this one already?). And who can resist Michael Tully’s documentary masterwork, Silver Jew? Not even the Aryan Nation, methinks! Not to mention several Neil Hamburger DVDs, films by Austrian filmmaker Peter Liechti featuring Voice Crack and Roman Signer and the controversial prank porno (no actual sex!), Final Flesh by co-creator of PFFR, Xavier Renegade Angel and Wonder Showzen, Vernon Chatman. We might be new to placing film into theaters, but we’re not new to thinking we have even a hint of a clue at knowing what’s awesome and what we’d love to project into your lap (ewww!). We have faith that our people (even those people that aren’t born yet) will embrace this project with arms folded — and feet hustlin’ — to their local CINEMAS!!