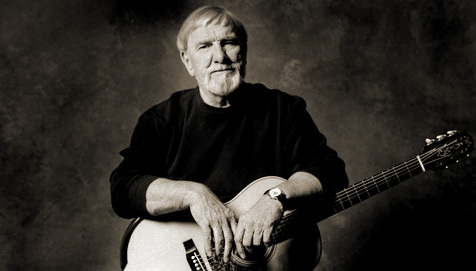 In the mid-late 1970s, Larry Jon Wilson released four masterpieces on Monument Records. Despite modest commercial success compared to some of his contemporaries, he certainly had a reputation in the outlaw country circle of songwriters (and ours!) as one of the best and most respected -- his own musical integrity may have gotten in the way of ever having a big commercial hit-- and while Larry Jon may not have seemed to put too much weight on making it big time or becoming famous, he loved playing music.

One of the more interesting, yet under-appreciated artists of our time, Larry Jon Wilson's voice was deep, smooth, and very, warmly, southern. His cleverly-crafted words reached beyond his songs-- he managed to nickname everyone and everything (his press kit became a "brag pack," our publicist Nicole became "Nickelodeon"). In the brief time we worked with Larry Jon since releasing his last album, he'd often call the office just to talk, tell tales of his days with Townes Van Zandt, Mickey Newbury and Kris Kristofferson, and pontificate about how, while he doesn't like most rap, he'd become fond of Ice T. While he didn't do a whole lot of touring, Larry Jon really enjoyed performing at the Bluebird in Nashville, TN, and at various times over the course of the last year, we'd hoped he'd consider an honest tour to help a new generation connect with his music-- though we'd often talk about that, too, it sadly never materialized.

Larry Jon Wilson was a true gentleman and gave us some beautiful music, enough to keep in our ears and hearts. A good friend, we will miss him dearly.