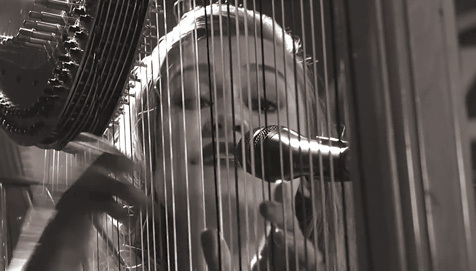 ANOTHER CHANCE FOR NEWSOM

When is it ever really worth it to watch TV these days? I mean, there's some good stuff on there, but it seems the airwaves are mostly filled with half-assed, mindless approximations of reality interrupted by commercials not nearly often enough (oh, for more commercials!). Well, the good folks(?!) over at ABC have given us the desire to grab our clicker again and fire up the old boobs tube - for you see, last week's Joanna Newsom appearance on Jimmy Kimmel LIVE! is re-airing on Friday. And as many of you might have only seen Joanna's performance on your computer (well, there are two performances online, only one of which aired - damn you, superior Internet programming!), you'll get a sudden second chance to see Joanna on an actual television late at night when you're tired and alone. Joy!

So what do you say? Shall we give TV another chance? Try it, this Friday at 12 eastern/11 central and 12 again way out west.