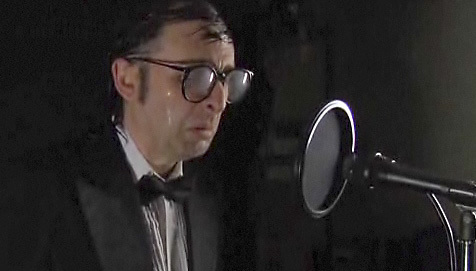 WE ARE THE WORLD... GOD DAMMIT!

Hey everybody! Remember the 80s? Live Aid and all that shit, that was horrible! Then there was "We Are The World," the landmark charity single from 1985 that raised the bar for bleeding-heart celebrity supergroups, liberal guilt & promotional tie-ins. It also spawned more parodies than COPS. Well...are you ready for another? Think of this as more of an update for a new generation (it worked out well with Gus Van Sant's PSYCHO, remember?) This is a similar shot-by-shot tribute BUT all profits are going to the noble non-profit Los Angeles Food Bank (Africa is sooo 80s). Instead of Jacko, Springsteen & Loggins, we've got the golden throats of Silverman, Nealon & Yankovic - But NO ONE nails the original's passion, spirit & perfect pitch like our very own Neil Hamburger (making a cameo around 2:30, as well as delivering the poignant final thought). There's nothing Neil cherishes more than giving back to the starved masses of Los Angeles (he's on food stamps himself, so he doesn't really qualify) -- so c'mon people, support this selfless crusader! As an added bonus, Master of Ceremonies Kurt Russell (huh?) turns in his finest performance since Captain Ron. It's good to see him working. Get weepy: