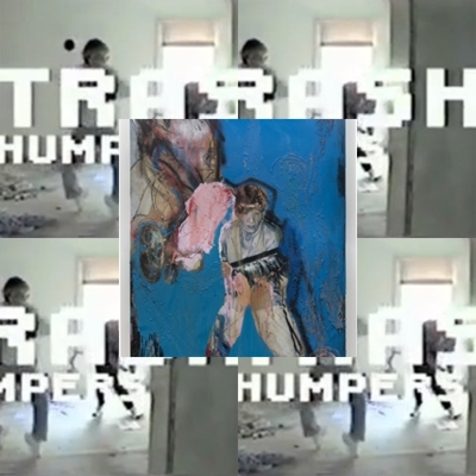 With all the garbage that regularly spews out of New York, you wouldn’t think painter Rita Ackermann would have to go all the way to Nashville for a trash fix. Then again, Harmony Korine does possess an extraordinary knowledge of refuse and the like. The two have teamed up for an installation at the Swiss Institute Contemporary Art New York, currently on exhibit under the name Shadowfux and based on the same shapeshifter-pagentry as Korine’s film Trash Humpers. The installation aims to “stalk the viewer from the fringe of the exhibition space," and features a lot of those old humpers in various forms.

If we lived in New York we’d definitely wear our sweatpants to the show. But hey, we’re wearing them most days anyway!

In preparation for the opening, an interviewer from the UK asked the all important question of like, why the fascination with people who fuck trash? Bated breath....

Rita Ackermann: I don’t know why. We don’t think those people are weird though — we think they’re normal. They seem strange to you maybe, because you live in London, but if you live in the mid-west, it’s not really that strange. I mean, you step out of Houston airport and you see these people immediately, and even more obscene people!

Harmony Korine: (Laughs) Yeah, I mean, I married a woman who can swallow fifteen live goldfish in a single gulp. It doesn’t feel like that’s anything strange to me, it feels like there is a poetry to it. All that my neighbor does is steal yard furniture; he just goes around stealing it. He’s a very old man and that’s his hobby.

So now you know. We’re normal, just not to anyone else.