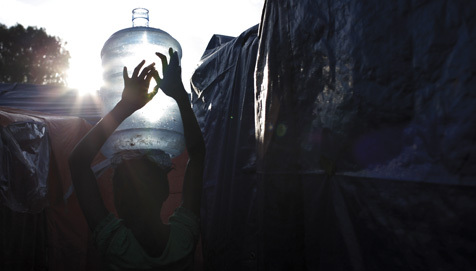 It's been a year since the catastrophe in Haiti & ONE MILLION remain homeless! Back in October - when you were stuffing your skull with Halloween candy while humming your fave Bonnie 'Prince' Billy album - an outbreak of cholera was confirmed by the Center for Disease Control and Prevention. There have been 140,000 cases - with the death toll now well over 3,000 people. Does this make you wanna get off your still-costumed duff (what's with that, anyway?)? Well, you CAN help by simply picking up the new 10" single from Bonnie "Prince" Billy & the Cairo Gang! "Island Brothers" / "New Wonder" won't hit the streets until Tuesday (though you can preorder one or some from our webstore) - but in the meantime your eyes and ears can absorb the video for the flip-side slow-jam "New Wonder"! It's just a brief click-trip away at EDGE OUTREACH, where you can learn about a noble troop of Heroes & Louisvillians in the biznazz of training, equipping & providing grassroots water-purification systems to peeps in need. The Bonnie 'Prince' himself has walked the halls of EDGE's HQ & was so impressed that all proceeds from this glorious ten incher are going straight to them. So it's time for him and us and you and them to join hands & Do The Right Thing!