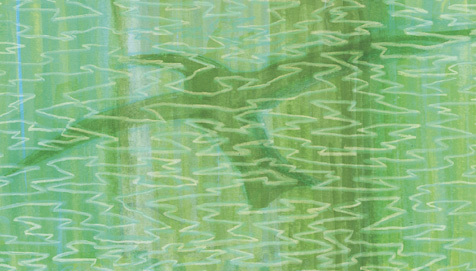 AUGUST BORN FOR A NATION IN NEED

As we’re often at pains to tell you, we’re all living in on this earth in interesting times - and that’s not always a good thing. Recently, we were talking to you about the humanitarian upside of buying the new Bonnie ‘Prince’ Billy & The Cairo Gang 10” single. The response has been powerful and we and EDGE Outreach are grateful to you. Meanwhile, as you know, the earth hasn’t stopped shaking. So now, we’re talking to you about buying a record to provide help to the stricken people of Japan. So starting today, we’re donating proceeds from the sales of all August Born LPs, CDs and downloads to the Red Cross effort in Japan.

August Born was released in 2005. It is a collaboration between Ben Chasny (aka Six Organs of Admittance) and Hiroyuki Usai (aka L). Ben was a long-time admirer of the L album Holy Letters and so suggested a collaboration with his hero. This started off as a type of as a game “fortuitous mistranslation.” That is: even if Ben and Usai didn’t understand exactly what the other wanted to do or where to go with the song, the songs themselves would find their own direction. The project started with the scraping sounds of a bird being buried. As improbable as it seemed, these sounds eventually created music.

For August Born, there was no shared language, sound was the only continuum for communication and expression. Now you can hear this record while sharing the continuum with the humans in need in Japan, as we are sure they would do for us when the earth starts shaking around our ears.