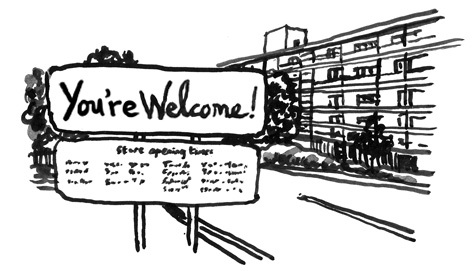 Lately we’ve come to appreciate that urban outpost for the stars known as the record store. No matter how heavy shit gets, one can always seek refuge from the perils of modernity among the dusty racks of compact discs. Oh and LPs, too. Nothing says “20th century” as well as a pile of dusty old LPs and CDs in alphabetical order! And really, is there anyplace better for conversing long hours with a clerk about the latest ripple in the canon of western music? O, those shining examples! Those carefree enthusiasts! Those fashion-forward lynch pins of the “scene!”

Nowhere else can you absorb the unaffected chatter of youth than in these bastions of time! So, in the tradition of Lindberg, Earhart, and Cook, Drag City will enter the unexplored territories and throw consequence to the wind. The wheel of progress cannot be stopped, much less slowed - and who are we to be left behind?

That is why, this coming weekend, Drag City will offer a priceless piece of music exclusively to the patrons of the record store. We won’t even sell it on our mailorder! We’ll leave the selling of the priceless item to your local agent to put the price tag on it - so if you want it, you must get it at the store and you must go on Saturday, April 16th. We debated when to schedule this forever-to-be-remembered day, but every day seemed worthy of such a joyous occasion, so we just picked a day in a month that had nothing else really going on. Because really, isn’t every day a good day to buy a record?

We’ve also limited it to 500 copies and decided never to sell it again outside of this momentous Saturday. So you get one shot and one shot only! We here at the office have even been so glib as to give this day a quaint marker of sorts: Pusher Day. But it’s up to you to make it your own! Just buy what we sell — you don’t want your friends to have an exclusive, limited High Llamas 7” on their “about me” section and all you have to show is a vague reference to music anyone can hear on the radio! Come on!