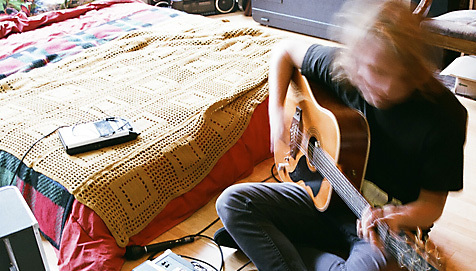 FLIGHT OF THE SEGALL

Dang, s'been a tuff week, our backs be flat out broken from slinging all these Ty Segall 7"s out into the wonderful and frightning world o' retail. But the feedback's been rad-plus, homes! Plus, people are eating up the single! (Plus, they're buying lots of them too) If you're wondering, what we are talking about is "I Can't Feel It," Ty's debut single for Drag City. It's just one of the many ballz-killing tracks off his forthcoming album, Goodbye Bread. The single's b-side gots a totally exclusive track you won't find nowhere else, fan of recorded wares, non-LP b's and collectin' things! We are Drag City, we encourage the consuming completist in you!

Too pumped to stay in the gate, Ty's already off on the touring track. Yah, the pure-bred rock 'n roll colt is hoofing it over in Europe beginning on Monday! This is the first leg of what will likely prove to be an all-encompassing, world-dominating breeze of a 2011 tour for Ty Segall, and it's with conscientious piece o' mind that he kicks shit off in Germany. If Germans know one thing, it's the correct way to rock. But they're not the only lucky SOBs, lookit all the other dates below!