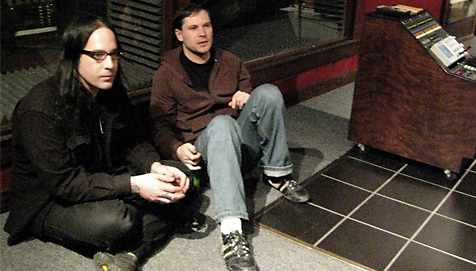 We felt something rumbling outta the West, thunder and lightning and all that comes with heavy rain, plus high winds and dramatic temperature shifts hitting DCHQ this past week, and have finally figured out what it was! Since it's totally unnatural to be hit with such apocalyptic weather on the eve of June, and since Drag City-types are total skeptics, a few inquiries were made and a few leads followed... only to reveal what should have been obvious from the start-- the culprit is none other than OM, who are deep in the midst of recording a follow-up to their Drag City debut, God Is Good, at Tiny Telephone Studios in San Francisco, CA. Days and nights without rest, tirelessly writing, editing and refining the scrolls, testing the vibrations this way and the other to capture the essential feel, it's no wonder some freaky shit flew our way. Our conspiratorial minds thus eased, we're kicking off this long weekend just as should you -- fully joyed at the prospect of a new OM album in 2012!!! Ma(ya)n oh man!