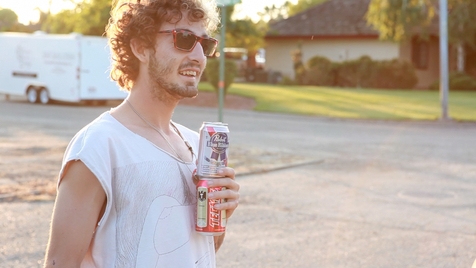 You may recall Drag City's first leap into the film distribution pool with Harmony Korine's Trash Humpers. Did you really think we'd stop there? Fuck no! Now we're pleased as a freshly satiated crack-head to announce the second film to receive Drag City distribution treatment in theaters nation-wide: DRAGONSLAYER! Winner of best documentary, feature, and cinematography at SXSW 2011, Dragonslayer documents the transgressions of a lost, punk-skater kid falling love in the suburbs of Fullerton, California, but in love with what? The protagonist takes us through a bleak-futured valley of skateboarding, drugs, and stray glimpses of unusual beauty: all things we tend to groove on! Hell, even the soundtrack is delish, naturally.

Accordingly, we now to invite you to a special Dragonslayer screening at BAM this Sunday, June 19th (take your father!), where you'll have the opportunistic privilege of asking a question or two of the director, Tristan Patterson, and the producer, John Baker, both of whom'll be in attendance! Seep on outta your tiny living holes, Brooklyn, and make it happen! Watch out for Dragonslayer!

DRAGONSLAYER Teaser - SXSW '11 from Animals of Combat on Vimeo.