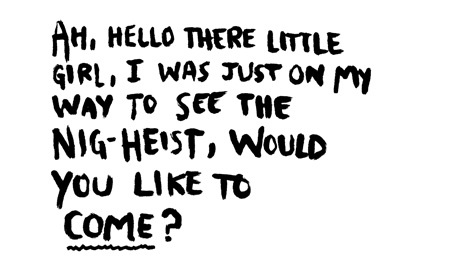 THE HEIST IS IN

Yes, The Nig-Heist is in! The world wasn't ready the first time around to burden itself with perhaps the filthiest, vile group of condom busting fucks, but it's 2011 now, so we're all mature enough to handle the load, right? Aw, take that stick out of your ass, make room for Nig-Heist!

Back in 1998.. not wait, let's go further. Back in the early 80s, a group of sexually depraved Black Flag roadies and SST hangers-on formed a band called Nig-Heist. Though they might've made you laugh, the Heist were not your friend. They existed specifically to antagonize and abuse cookie-cutter, close-minded punks who infiltrated what had once been a creative and open-minded scene. If you were in on the joke, it was hysterical-- Nig-Heist's leader, Mugger, wore a long-hair wig and little-to-nothing else on stage, berated the audience with mocking jokes about conformity and sexuality, and repeatedly requested sexual favors from the women (and men - "If you spit on me, make sure you aim for my asshole, so that afterwords, when you're butt-fucking me, there'll be nice lubrication.") in the crowd. Nig-Heist songs are explicitly sexual and will appeal to the deepest, filthiest thoughts you've ever had inside you. They made some recordings back in the day, and many a live recording exists, too -- all that shit's been compiled onto one LP and a bonus CD, initially reissued by Drag City back in 1998 and now back in print for the first time since! Pre-order this dripping, tight little record from our web site now, or grab it in stores on August 23rd!

Artists in this story: Nig-Heist