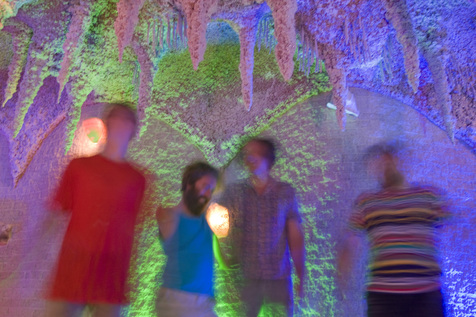 It’s a Friday and you’re thinking, “There just aren't any words to describe how I feel!” We know the shit is tough for you these days what with curfew and algebra, but luckily CAVE has the vocabulary to fill your gaps. CAVE has a new album called NEVERENDLESS and it’s full of words, just not in the songs (as a matter of fact, the songs mostly don't have words in them!) Take “WUJ” (please!) – it’s effortless, makes your face look funny and kinda sounds a lot like other words without being close enough to be confusing. Try it in a sentence! Scream it when you cream it! Tag it on your neighbor’s garage door! And all those bongs in the basement before school (or hitters in the car before work) make “WUJ” sound even better, dude. So write it on them, too. You friends'll be like, "WHU?" And you'll go, "No - "WUJ!"

But we know it’s awkward to stand around the jerk site with 5 minutes left in a 7 minute song with nothing to look at but your dumb friends struggling, so Miss Pussycat put together a video full of puppets and zoo animals to psych you up – or out. We’re not there yet either. But like, which WUJ you rather?