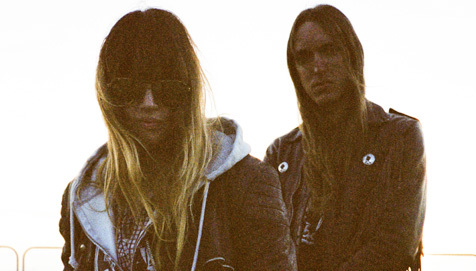 FROM THE JUNGLE COME BLACK BANANAS

Shit, Drag City's finally up and running in its new digs, and what'd we find creeping out from our kitchen? Nothing but BLACK BANANAS! No, not your rotting, starchy, potassium-filled fruit - Black Bananas is Jennifer Herrema & Co.'s new band, excavated from molted peel of RTX. Why the name-change? Well, who other than Jennifer is the queen of Banana songs? And after three albums under the name RTX, Herrema and her bunch- Mckinley, Midness, Welch, and Eisenman- decided to flip the script, to kick open the doors of perception a little bit. See, RTX was not Royal Trux, not a metal band, not a 70's bar band and not a toxic substance; RTX was something, all of those things and none of them and way more, including Black Bananas - bubbling in a witchy cauldron of their own herbaceous brew. It's a new strain of the almighty green – to feed and elevate the hungry ones. Black Bananas are ripe with a full LP in the works - look for it first thing in 2012; beat your primate chest, and go bananas over Black Bananas!