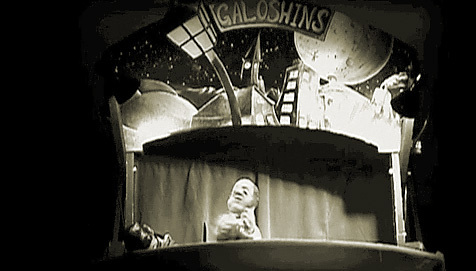 Alasdair Roberts: Scottish singer of traditional songs, deft composer in his own right, world touring performer, compilation compiler, and.... puppet-master!?!/? Indeed, Lorde Roberts continues to expand his CV with roguish flair. Alongside drum beater (and mate) Shane Connelly, Alasdair recently mounted an evenings-worth of music and puppetry at London's Cafe Oto, where the two presented a ciphered version of "Galoshins," a folk play traditionally central to Scotland that tackles themes of combat, death, and resurrection. You can check it out here, thanks to Fluid Radio in the UK!

Alasdair started the evening off with a brief set of his own, including a song written by his father (pure bred, that Alasdair!), which you'll see at the same link). As we've noted before, Roberts is a true renaissance man! And a busy ren-bloke at that! Let's see, recent events include playing all the hell over Scotland and England in relentless fashion, as well as masterfully curating Twos and Fews' recently released Alan Lomax Scottish compilation, Whaur the Pig Gaed on the Spree (still available for consumption, after all these days!). Plus there've been recordings! March 2012 sees the release of his next studio album, a collaboration with Mairi Morrison entitled, Urstan! To boot, the dude's another bit o' touring ta diu before the years' oot, up and down England throughout December! Whichever way you need him (with or without moppet) Alasdair Roberts is the right man for the job.