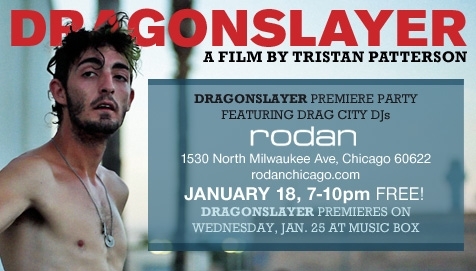 On January 25, 2012 Dragonslayer comes to Chicago for a one night only event at the Music Box - remember? Jesus, it seems like we've been talking about it forever! And well we should - because this documentary film is coming at us so hard from the opposite side of our "whoops, now it's sleeting in Chicago"-style existence, its gonna take a few mental breaths so as not to get the mental bends as we slide to the bottom of the contempo-California skate-punk metier that is the world of Dragonslayer. So how about this? To prepare our minds (and your minds and our belong together, doncha know) for the incoming vibes, we’re invading Rodan tonight, January 18, in Wicker Park from 7-10PM to preview the film (by which we mean, show the preview), spin some records, drink some soda, take our shirts off, maybe step to somebody, if we feel like it. It's a free world you know? By which we mean, the Dragonslayer event is free and we’ll be there selling tickets for the film in case you ain't you bought yours yet, so come by. Maybe bring your board and we’ll do kick flips in the alley. All are welcome, even the heschers. Or is that, especially the heschers? See, we're still trine to wrap our heads around this strong shit.

Don't forget about the main event, the Chicago premier of Dragonslayer at Music Box on January 25, 2012 7pm featuring live music and visuals from Bitchin Bajas, Mayor Daley, Olivia Wyatt. Plus after the film there will be a live Skype Q+A with director Tristan Patterson hosted by the one and only Rockin' Rian Murphy.