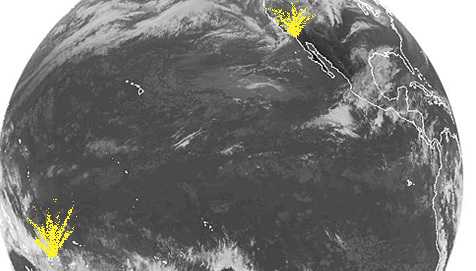 New albums out, shit. Hey, we love 'em, but let's be honest — a new release is just the same as any other release, it just sits in a record store waiting for it's own peculiar kind of magic to occur. Or, okay, right — on a website, waiting for your to download and upload and digitally loose its (reduced) magic. But a new release plus a show? Now that's something a little more real. The new music is represented in a place that is shared by the artist plus you and me. We're all here, inside the music. Now that's magic, and its loose in the world! Anything could happen. Case in point, my friend — case in point: brand new, out-tomorrow new releases from Black Bananas (NEW ALBUM! NEW BAND! NEW!) and Doug Jerebine/Jesse Harper (the fabulous boot come to life after all these bootleggy years) are being followed by — what's that, say it all together children....LIVE SHOWS!

Yep. Separated only by ONE OF THE GREATEST EXPANSES OF WATER IN THE WORLD, Black Bananas take to the stage in Los Angeles on February 2nd and Doug Jerebine does the same in Owhango New Zealand on February 11th. The winners? Put your fingers down, we've got a shortcut to counting the ways - everybody wins. Even the inatimate object known as the record (or the download — whatever you want to call it, dude!). Then what happens? Aside from the world being a better place, MORE SHOWS! Black Bananas hit the national tour circuit with Sleigh Bells to promote Rad Times Xpress IV for a fair chunk of the rest of February - and Doug Jerebine, he doesn't have any more shows — yet. When people start hearing the Is Jesse Harper LP, there'll be opening slots dangled and festival requests made. And then the world will know. But for want of a live show, the world might never. T'was ever thus.