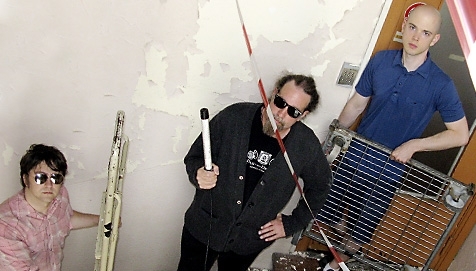 What's that the dust rolls in? Why, it's the three noise-slingers of truth, the triumvirate of the apocalypse called Rangda! Three heads are better than one, they say (in evil unison), and these three man-heads, put together, are rabidly carnivorous. Asleep for some months, Rangda's awoken hard from it's wintry hibernation to annihilate (...er,make musical friends with, c'mon!) everyone they meet next week in the United States' infamous Northeastern corner. A tour! Rangda on the road! Rangda vs. New England! Chasny-Corsano-Bishop, fattening up while feasting with some of their favorite comrades, like Magik Markers and Major Stars! What does it mean? Perhaps our famine is coming to an end, perhaps... a new Rangda record is in the incubating? Only time and (human-ish) sacrifice will tell! Meantime, grab a ticket to one of the fine shows below, and hide your children (not not in your stomach...)!