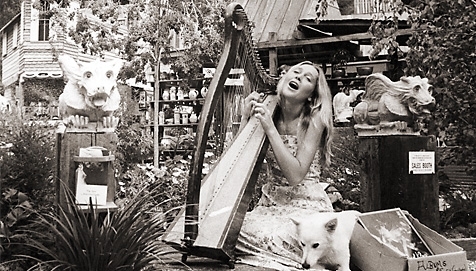 TAKIN' THE TIME WITH CAROL KLEYN

As of the late summer of 2011, Carol Kleyn was back, with her privately pressed 1976 debut on CD for the first time ever and LP for the first time since it was pressed back in '76! And now that it's summer again, 2012-style, Carol Kleyn is back! Yeah man, it's the next frame of the Carol Kleyn reissue reel, Takin' The Time! Eight years after writing her first songs and dropping out of college to pursue her passion as a street musician, Carol was still following the love, making music and magic as she roamed free up and down the California coastline. The harp that Bobby Brown (of The Enlightening Beam of Axonda and Bobby Brown Live - not Whitney H's man-widow!) gave her back in 1971 was still her main axe whenever she played, and the primary instrument she used on her debut album Love Has Made Me Stronger. That record had been self-produced, and Carol sold copies wherever she played, but for the production of Takin’ the Time, Bobby Brown stepped into the producer’s role, creating a sleek, light vibe that projected all the hope and joy that Carol’s songs held within themselves. As Carol's music danced with a band for the very first time, on the first half of the album, the latter half presented her in the more familiar solo performance style that her audience knew and loved. These were smooth sounds for a new decade that included concerns about the environment and an ever-present prayer for peace. Takin' The Time gives back to the world on August 21st - but dig this preview track, "Jethro", and read on for glimpse into the song's amazing origins in a dance with 1970s-vintage major label moguls, as told by Carol herself:

“In 1976, I was stepping into an elevator in the United Artists Records building on Sunset Blvd. with my dog, Mom, at my side, wearing a POCO t-shirt and carrying my harp when a man standing inside the elevator started talking to me and soon asked if I'd like to come up to his office and play him some songs. His name was Artie Mogull and he was then President of United Artists Records . . . soon to become CEO and owner of United Artists . . . who'd signed greats like Bob Dylan and discovered Laura Nyro. After I played a few songs for him, he asked me to go home, write a new song and come back the next day to play it for him. I wasn't sure I could write anything that fast, under that kind of pressure, but ended up writing ‘Jethro’ that night (which I decided was more upbeat than most of my other songs). I came back the next day and played it for him and for a producer he'd invited to be there: Milt Okun. (Milt produced artists like John Denver, Peter Paul and Mary, and Laura Nyro) Afterwards, Milt gave me a positive nod, along with his phone number and I, of course, hoped for that break, but somehow, I was never able to reach him and the connection was lost.

After this album was recorded, in 1980, I often wished they could hear it again, with the drums and that electric guitar . . . ”

BAM! Dream fulfilled. If you believe in the afterlife that is. We're arranging for an audience with Mr. Mogull's ghost (he passed in 2004), and Milt Okun is still with us. Milt, if you're listening, call in!