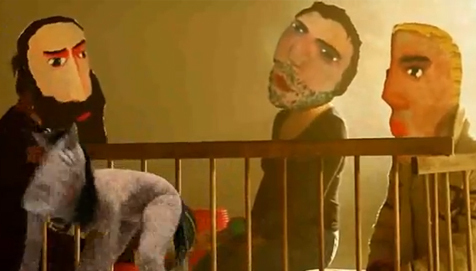 Whoa, we always knew we were visually, musically and hilarity oriented all of our long, incredible lives, but wow - Dirty Three video, where have you been all this endlessly boring time?!? It's... well, let's start with words that have already been invented: the song is called "Rising Below," and it's from the album that brought Dirty Three to all the illegitimate children of their original fan base ("bastard rock," we call it), plus whoever of that diseased old fan base is still kicking (literally and figuratively, a course!), Toward the Low Sun.

The vid depicts a quasi-medieval, quasi mythical battle of the ages, done in the style of modern dance, so you can't tell if the creatures are sensually courting or sexually cussing each other until the knives come out. It's a lot like The Black Swan, sort of. But the costumes in "Rising Below," they'd make old Natalie Portman shrivel up and die (unless that isn't what she was actually doing at the end of the film, we were confused. Suffice to say, if she actually did off herself, then the movie sucked. If it was an allegory, then the movie was cool. DC film-oriented too, homes!). Yeah, we predict all the school productions are gonna look like this in the next couple years, that how amazing the "looks" are here (DC know fashion too, bitches!). They're all based on the characters Dirty Mick painted for the tapestry that makes up the front cover of Toward the Low Sun - and based upon the action depicted here, can "Toward the Low Sun - The Musical" be far behind? It'll be the next "Cats" - assuming there hasn't been another "Cats" yet. Had to say, we don't keep up with the musical thee-atre too much. But now legitimate thee-atre, that we know! And to prove it, try this - we believe that Daniel Radcliffe's naked turn in the "Equus" revival would only have been enhanced by the horsey outfits in this video.

There's parts for kids and parts for adults in the "Rising Below" video, which makes it fun for all members of the family, the way Disneyland used to be before they ruined it. It'll suffice all yer D-Three fanz who can't wait to get it on at one of the US and UK tour dates scheddied for this fall. But best of all, they were able to shoot this without having to go down to the docks and fetch the Dirty Ones themselves out of the dive bar where they spend all their time between album sessions and tours and the like. Now that would have been a cuss-ridden battle royale!

The Melbourne creative team deserves special mention, as they made a this song into is a video of uncommon strength and poignancy. "Rising Below" was directed and edited by Emma Watts, whose capturing of Gabi Barton's choreography and creative direction is transcendent. For those who want more like this, check out the performance group Town Bikes' site: http://www.thetownbikes.com/