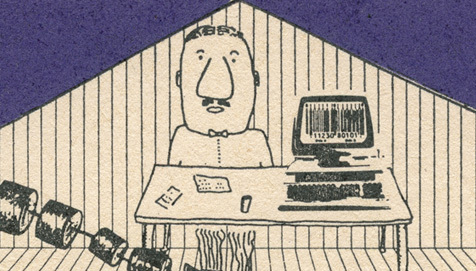 Woo, who?! Woo! Woo! The musical climate blaze of 2012 reminds us of a friendlier time, the late 1980s, one in which Woo were able to create relaxing and mysterious mood music with electronically treated acoustic instruments without pretension. Not to say that Woo are precious, in any way- far from it, in fact! No, but the music they've inspired often seems to come with an air of precious pretension about it, as if to say these newbies with their toys are the first of their kind. Fortunately, we here at Drag City HQ revel in the ability to prove you wrong on a regular basis! Woo, the duo of Mark and Clive Ives, having made music for 30 years now, including music designed specifically for healing and meditation. That's right, your friend's band claiming to be into nu new age are nothing new at all- Woo aren't distinctly new age necessarily, either, but we're certain you'll be hard pressed not to hop into a happy and mysterious meditative state upon listening to It's Cosy Inside, their masterpiece from another era, 1989. Can you imagine this sun-rise soundscape arriving at the dawn of the grunge age, back when Drag City was a mere pup to a pack of wolves? Only the strong survive, Woo-fuckin-hoo! Fall may be around the corner, but It's Cosy Inside on October 2nd.