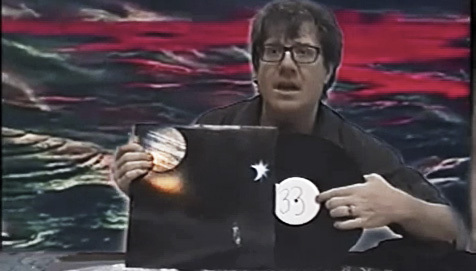 We love everything Six Organs has ever launched at us, and Ascent, coming out in less than two weeks, is no different - in fact, it's nothing short of our new favorite. The thing though about Six Organs is that we don't always know everything that's going on in that weird world...we might turn around and find some album that's come out on some other label, or a porno film soundtrack he's done. As tangential as that all is, then there's this video. To be honest, someone tipped us to this and we're totally perplexed... Chasny's been reticent to comment while shedding for the upcoming Six Organs of Admittance tour, but we can't stop watching and feel the need to share publicly, even though it appears there's a conspiracy to prevent people from purchasing or even listening to Ascent. Call us the "sheeple," but while that sure as hell does look like Matt Sweeney testifying to some crazy experience where lizard-like men herded Chasny off into the shadows during a Current 93 soundcheck in Moscow, we just can't believe Six Organs is involved in any Illuminati-type shit. Anyway, besides giving us a scary WTF?-feeling, and despite Six Organs' Jack Parsons 7" coupled with this recent Mars landing of NASA's "curiosity" machine, we've got to share this and confirm as best we can, there's no reason to fear Ascent... we hope!?!?!?!!