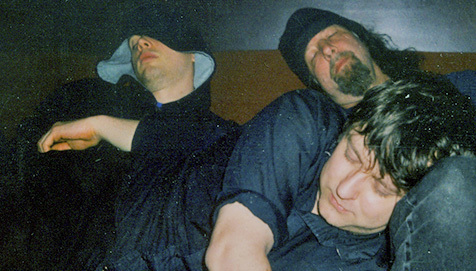 What's it been, a few days since you last listened to False Flag, Rangda's debut guillotine-machine shred-fest? Does Rangda stalk your dreams, inducing night terrors that wake you repeatedly, merely giving you another opportunity to spin the LP like the addict you've become? Yeah, you're hooked now, just like we planned, and just in time for the new Rangda wares we're peddling! The full dose, called Formerly Extinct, won't be available to you until September 18th. But like a good dealer, we're giving you a little taste to keep you hooked, a track to keep you going, string you along, until the big one hits the street. Try and try again, "Majnun" won't let you overdose, it'll just keep you strung along on pure Rangda, one child-eating hallucination after another. Why fight a battle you're going to lose? Just try and prevent Rangda's "Majnun" from overpowering your mind. Go ahead, man, try it....