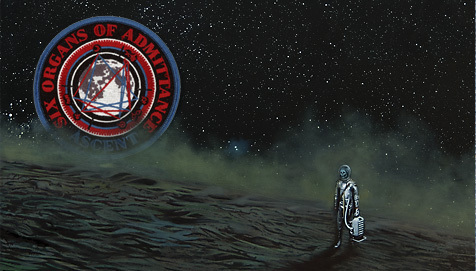 LIFT OFF! WITH ASCENT!

Despite the radical resistance from some internet wack-jobs, Ascent from Six Organs of Admittance made it out to the streets today, in a big-ass way! Six Organs involved with some NWO-type shit? We don't think so! And neither do Six Organs fans, cause we've already had to repress that nearly extinct format called the compact disc due to the first pass selling through. Resuscitate, tangible digital! Don't worry, the production team here at Drag City has ensured that there's no stock gap; no, all orders will be covered. So don't shy away, kiddies - sure, you've been warned off this record by some of the most paranoid freaks this side of the PMRC, but that's never stopped you before! So grab yours, like an adult! Make a stand, strap in, and get ready for Ascent, today! Full-throttle full-band Six Organs! While you're at it, initiate yourself deeper inside the Ascent clan- er, club, by grabbing the official _Ascent_ patch! Complete with Jack Parsons birth sign design, this embroidered patch will save you from any secret police identification when worn on the outside of your clothing. Nothing to fear here!

Grab Ascent now! Grab a patch, or three! Cause we're offering a sweet deal if you do. Save your friends while you save yourself! Hell, grab three records, too!