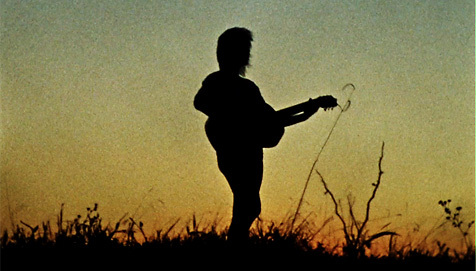 KNAPP "EVERMORE" AND THEN SOME!

Whoa, have we reached the near-end of November already? Feels like just yesterday we released the debut album from Sophia Knapp, Into The Waves, to critical and metaphysical praise. But here we are, 9 months and 3 videos later, with yet another killer video from Sophia's magical LP, this time for the song, "Evermore."

A collaboration between Sophia Knapp and filmmaker/director Antonio Sobral on 8mm film during an art residency outside of Rio de Janeiro, "Evermore" was created during the enchanted month the two artists spent together last July, imaginatively blending experimental and cinema verite techniques. Featuring footage of the Brazilian wilderness, it presents a scintillating portal into the world of Knapp. Reflecting on the shoot, Sobral recalls, "she was there by the waterfalls, and she was filmed just as the butterflies were. Sophia sings: 'dreams become reality', and I´d add that within time, reality becomes a dream too." So go ahead, bend your own dreamy reality by watching this warming video! And if you're over on the east coast, be sure to grab a slice of Sophia live, at one of the gigs below.