BUY YOUR WAY INTO THE SOURCE FAMILY TODAY! 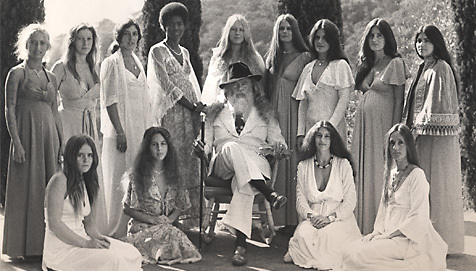 YaHoWha! People can't stop talking about The Source Family documentary! This most loving yet kinda insane cult too of the 1970s hippie cult scene, centered on Father Yod's electrifying teachings and larger than life persona, maintained a brief yet remarkable utopia in the early 70s on the back of their hip n' successful health food restaurant called, The Source. Things got a lot trippier than the vegan chow they served up to stars and castaways on a daily basis at the restaurant, as Father Yod's ideas and teachings were the basis for a new, counter-cultural society, one filled with sex, drugs and harrowing rock n' roll! Thirteen wives for Father, hundreds of hours of psychedelic jams recorded to tape, high school recruitment, daily meditations and prevalent use of the sacred herb dominate the lives of all enlightened beings who joined The Source Family. It went off without a hitch for as long as the inspiration lasted - but like all highs, this one couldn't last forever (thank Yod! If our last acid trip were still going down...mega-bummer). The Source Family documentary details the intensity and amazement with archival footage and interviews from Source Family members, set to the most cosmic soundtrack of any documentary in recent recorded history. The Source Family premieres at IFC Theater beginning May 1st, running through May 7th, and TICKETS ARE ON SALE AS OF TODAY! Don't meditate on it too long, baby - live today, lest you'll be left out of The Source Family forever!!!