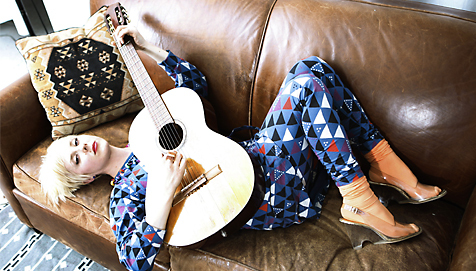 It's been just over a year since we first jumped Into The Waves, with a life boat full of songs from Sophia Knapp. Adrift the chops, we've seen a slew of video singles from the album and a smidgeon of live shows for lucky-few audiences across the US. The next week brings another one of those hyper-lucked out times, as Sophia plays two shows in the New York area around the release of a new 7" single, book-ending Record Store Day. Seriously, who doesn't need a distraction from the chaos and mayhem involved in the yearly ritualistic scavenger hunt for those three good products amongst thousands of toss-offs? Shit's stressful! Leave it to Sophia to bring you into a pop-fueled state of mellow positivity so as to get you through and past the hard times. The Knapping hour gets started at Brooklyn's Silent Barn on Friday, April 19, with a banging new drummer in tow! Chasing the vibe will surely lure you to Wednesday, April 24th's show over at Tammany Hall, where Sophia's up against some international acts - but who stands a chance competing with such a universal talent as Ms. Knapp? No one, naturally! Believe us and be there, Sophia Knapp takes on New York beginning Friday!