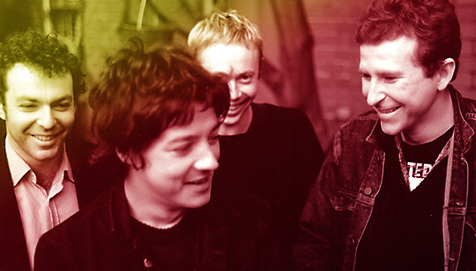 Everyone comes from someplace, amiright? Even the filthiest of men are whelped bad-boy babes at the onset. Take the Dirty Three, for instance - two of thems fucks were truly nasty when they burst forth, dripping placenta all over Melbourne circa the mid 1980s. Together, Jim White and Mick Turner were half the freak of nature called Venom P. Stinger in their younger days, grafted together from the best parts of the best bands that town had to offer (sorry, Birthday Party!) - Sick Things, Fungus Brains, Feral Dinosaurs to name but a few - with singer Dugald McKenzie (also of Sick Things, conveniently enough) and bassist Alan Secher-Jensen making things wholly heavy and heelish. Venom P. Stinger dripped top-shelf 80s post-hardcore from down under, Dugald's sneering rough-sod vocals depicting the day-to-day norms of partying with drink, and drugs, and other low types drinking and doing drugs, responsibility free - so as to, you know, get done with that just to do some more. A band with this kind of errant power - Mick's shredded and cut guitar squall and Jim's rolling-in-danger-of-rolling-over drumblasts - fronted by a retrobate like Dugald...well it made for madly entertaining shows at the very least. And records, mang! Shoo'. Which is why Drag City's all set to reissue all fourra dem albums from 1986 to 1991, plus the first 7"!

If you weren't familiar with Venom P. Stinger before now, you can finally get acquainted and get off like a good little deviant. But even before then, you can get off with an exclusive, non-album track from your pals, Venom! Behold! Venom P. Stinger's version of "Superfreak." Cause they were too, in a way Rick James probably couldn't see in his own drugged freak-brain. Listen up kiddies! And get ready for the official return of Venom P. Stinger, August 20, 2013.