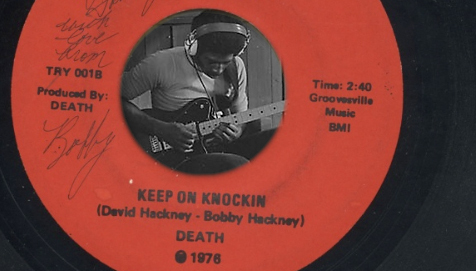 DEATH IN A THEATER NEAR YOU!

Four years since the release of ...For The Whole World To See, and everyone continues to talk about Death! Be it TV's morning news or the raggedy ol' USA Today, when it comes to Death, the nation is obsessed. And why wouldn't they be? An essential part of living is experiencing Death! Drag City first teamed with Death in 2009 to properly release ...For The Whole World To See for the first time since it was made back in the mid-seventies, it's total realization of what would be come punk clearly essential to anyone's collection. Ever since, having finally heard the recorded sounds of Death, the world has never been the same! Soon we released a follow up of unarchived material, Spiritual, Mental, Physical, the band brought Death to club stages around the globe, and t-shirts were printed and worn, all in the name of Death! Lately, peeps be buzzin' about the documentary, A Band Called Death, which opens in major towns across the USA this very evening, June 28th. What's more, the members of Death will make personal appearances in select cities over the weekend: tonight and tomorrow in Los Angeles, at Cinefamily, Death will perform, live! Then on Sunday, June 30th, the band appear at Cinema Village in New York for a Q&A following the screening of A Band Called Death. So perk up, America! Death is all around you, everywhere you look - catch your Death head on, and don't forget where you can best support Death - right here in the reapin' robe folds of Drag City's official online store.