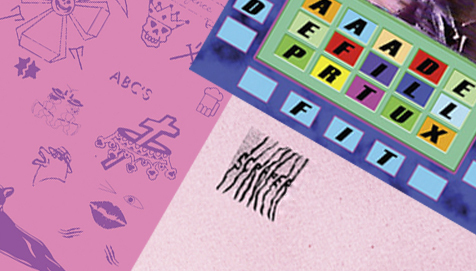 Everything we do here under the Golden Arches at the Ivory Bunker is for Drag City. And yet, not all of it is Drag City. And yet again, everything we do here for Drag City is truly done for you. It's the artists of course who're cashing in. Yet again, we're cashing in on them. And you, obviously, we do it for you and cash in on you, too; and you on us, too (we supply your content). So with all that in mind, it's July here in the Midwest and what better time to add some non-Drag City releases to an already flawless release date of not just music but entertainment in general? Update your scorecard - Andy Kaufman and Bitchin Bajas are paired with brothers from other mothers in the form of TWO releases from the GOD? label, as well as the first Ethereal Sequence release ever handled by Drag City. We're known to keep our horses in different stables, but they're all necessary parts to a happening farm, dig? So what's up, GOD?? Remember the Hair LP from way back in 2012, featuring White Fence? No? Check your turntable, brosef - it's the one been on the platter chiseling your needle (and vice verse) non-stop for a year. Now, remind yourself of what you just told yourself: White Fence rules, and not just in collaboration with Ty Segall! In fact, White Fence's classic, self-titled album debut is such a burner that God? literally jumped into the fire to get the chance to present it to you, via yers truly, Drag City, for the next vinyl revolution. yeah, LPs are in, we're told, and God? knows it, too. Speaking of vinyl, God? hath bestoweth another gem upon you, too, with the debut recording from Scraper, outta SF. It's in classic 7" EP format, 6 songs blasted out into the studio with Ty Segall at the knobs. These tunes rip with riffs you gotta hear to hear, and even then - you may only be listening. On the other end of the spectrum (that is, Canada) comes Paula, with their debut, Relaxed Fit. If you're an R. Stevie or Ariel fan, with legs built for dancin' and clubbin', Relaxed Fit will suit you just right. Again, LP-only - like, for the first time EVER on LP! So there ya have it, punk: a rainbo under the Drag City unbrella, snack tastes like vinyl skittles for babies with turntables and a fistful of cash. Show us your wad, get with God? and Ethereal Sequence this month!