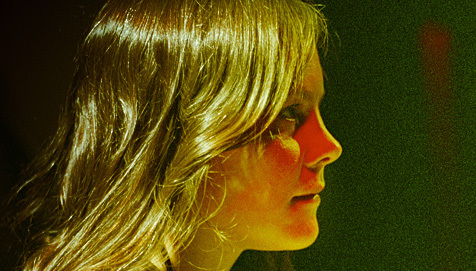 SCOUT NIBLETT ON THE USA TIP

Yeeeeaaaaaahhh, yeah! Scout Niblett's European tour was so successful, she decided to hang out there for the rest of the summer, basking in the afterglow of conquered cities, melted hearts, interviews completed, and videos made. The band was tight, the audiences loose, and the groupies looser, all serving to Ms. Emma's near domination of the EU mainland and British Empire. But regardless of Mercury's location in the relation to the sun (hint: it's a bitch!), our girl can't stay in hiding forever: the semi-friendly walls of the United States beckon for a fully realized Scout Niblett experience after the world-wide release of It's Up To Emma. Don't worry, you still have time to get some choice late summer swimming in - Scout won't officially plow American soil until September - but you'd be wise to carve the dates into the ol' oak tree by yer watering hole, so as not to forget. "They call me Emma" Niblett's packin' heat, remember? So hip yourself to the dates below, and hip-slide in slow-mo to this video of Scout doing her stage thing live, in Cologne. No word yet as to whether the cathedral stage prop makes it stateside! We're checking the budget...