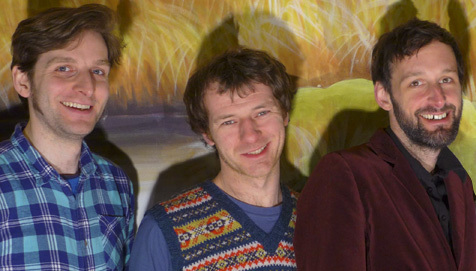 If ever there was a tour was battle-tested at the outset, none would come close to this. Alasdair Robers and Friends are finally on American soil after surviving the trials of Immigration offices, Visa-application drones and a multinational array of Consulates, as well as the tribulations of flat tires, canceled flights, evacuated airports, lost luggage and a subsequent no-show at Louisville's Forecastle Festival (sorry, Kentucky! Ali and Friends vow to make it back to you). No worse for the war — in fact, mightier for it — this band of brothers, now a trio of Alasdair joined by Ben Reynolds on guitar and Stevie Jones on bass, arrived in Chicago Saturday eve and immediately played an impromptu gig at a Rogers Park watering-hole, then awoke to tackle the record highs that afternoon at the Square Roots Festival and sent the outdoor audience into traditional Scottish folk-frenzy. Tonight, they take to the Frank Gehry-designed, futuristic stage at Chicago's Millenium Park — free for all the world to see. Following, the Alasdair Roberts & Friends tour begins in earnest — making its way up into the Canadian regions before getting back to states for choice gigs around the country. It's your chance to see the guitar neck manipulated by a Scotsman in ways you previously thought impossible — with proper singing, both dark and light, to boot. So now it's official! Alasdair Roberts and Friends are on the road! Three cheers for Scotland and endless cheers from their audiences along the way!