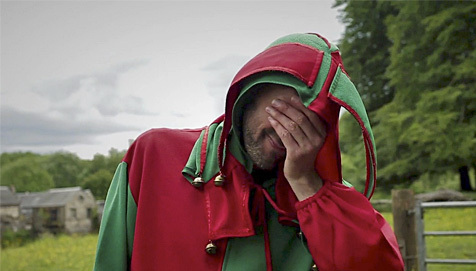 SCANDAL & TRANCE; AN INVITATION TO DANCE

Alasdair Roberts struck out into the North American wilderness with his pals last week, entering the topsy turvy tour void like a Scot outta Loch. But no monster he, Alasdair is more like a joker or jester, a man costumed as a man who entertains, and one who's in demand, as seen in the new video for his song, "Scandal & Trance," from A Wonder Working Stone. Yes, the jester expresses all manners and emotion, connecting with the people, dogs and tramps of this green earth in the ways we need it - passionately, humorously, with anger and joy and all that juxtapositioned darkness and light you crave as an emotional little babe. The part Alasdair plays is readily available to us here and now, a gift from Caledonia with folk jams, trads, love and death ballads, as he traverses from city to city. It's a rare treat that we(e) scoundrels are blessed with the purity of Alasdair Roberts' guitar playing and song-writing so up close and personal; yet, it's truly all we need: all days will end in joy, they'll never end in evil - as long as you stick with Alasdair Roberts & Friends! Get a glimpse of it all in the video for "Scandal & Trance," then check the dates to see where you can really get yours, in the flesh!