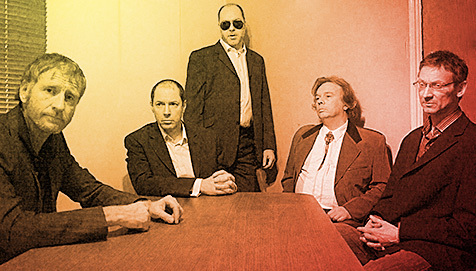 The bouncy pop-tones of Sean O'Hagan's High Llamas are timeless, at once occupying genres both modern and retro, for an entirely unique listening experience. And listening is the key; meticulous arrangements and airy acoustics have been most resonant in recent Llamas albums like Talahomi Way and Can Cladders, creating a most pleasurable aural experience for listeners and performers alike! On that performance tip, it's been over two years since the last Llamas show and the chaps are ready to play! Ol' London Town gets first crack, with two gigs at the Islington spread a week apart, April 25th (sold out, suckers!) and May 3rd (tix still available, punters!)! The band is petered to play which leads us to believe a giddy-mellow resonance will permeate throughout the evenings' bopping festivities. Following a one-off in the New Age town of Hebden Bridge, The High Llamas will perform original music to 5 Felix The Cat films live at the Sheffield Doc/Fest on June 15th! What does the future hold for the High Llamas? More music, more music, of course! Their new musical narrative, Here Come The Rattling Trees, is being recorded and will debut live/theatrically sometime in the near future; til then, grab tickets to see them live for the first time in an age, long live High Llamas!