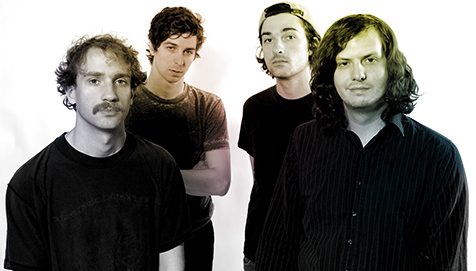 DOPE BODY COME BACK TO THE FRONT WITH LIFER!

Have you ever been punched in the face while dancing ecstatically but the person who hit you ALSO seemed be dancing and loving it but you couldn't really tell? If you’ve been in the front row at a Dope Body show – or the back row or somewhere in the middle for that matter – it’s a distinct possibility. The Baltimore quartet has built a reputationfor delivering intense live performances. Off the back of their 2012 release for Drag City, Natural History, the band embarked on a rigorous 19 months of almost nonstop touring, before taking a quick breather to pursue other outlets. The vacation was short lived. In January 2014, Dope Body was back in the studio recording with producer, Travis Harrison, at Manhattan’s Serious Business Recording Studio to record their sophomore album for Drag City, Lifer. On Lifer, Dope Body refines the aural yawp they have been perfecting for some time, wild windmills honing into surgical strikes, the band’s gut-busting repulsion-sound continuing to expand without losing any of the feral energy that made the group their reputation in the ever-insane Baltimore music and arts underground.

With Lifer, Dope Body have done it up again, and done it INTENSE, allowing us all to work it out on the floor once deeper and wider than before. Everywhere they go, the band bring their own lightning in a bottle, so you don't have to try and catch any. Hold on to your butts! It's time for another NEW chapter in the Dope Body saga; Lifer will be released on October 21st! Now listen to Lifer's first single, "Hired Gun," and go see 'em this fall!

Dope Body on the road: