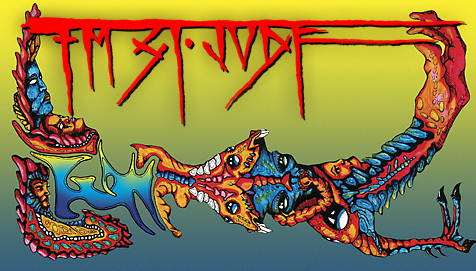 GANG WARRIORS! COME OUT AND PLAY!

The year is 1982. Ronald Reagan is president; AIDS and crack cocaine are rampant and are threatening to destroy entire communities. Nuclear war is imminent. It's a time of extreme excess and egregious despair. It's the absolute perfect climate for a change---a revolution is in the air and Frederick Michael St. Jude is bringin' it to the people!

Derived from this inspirational storm, FM St. Jude's 13-song, revolutionary journey is called Gang War! Gang War delves right into the grim vision of a near future, a time in which gangs and anguish rule over the country. Based on one song's dark vision, Gang War is a prophecy of destruction that seemed like the perfect musical accompaniment for a time of uneasiness. After countless, unsuccessful attempts to get the album released by a major label that could give it due visibility, F.M. took it upon himself to release it: Gang War simply needed to be heard! Unfortunately, while it made some waves around St. Jude's home state of Florida, the album didn't reach the entirety of it's intended audience. Perhaps like his contemporaries, Lou Reed and David Lee Roth, F.M. St. Jude was simply too advanced for his time!

Gang War formed a synthesis of different rock styles then in-vogue to create what many will consider a full-blown rock opera. "Boy, You're Not From Here," an album highlight, tells the age-old story of a young lad who doesn't quite fit into mainstream society's value systems: growing up on the hard streets and determined to make something of his life, he finds solace in rock n roll music. Freddie St. Jude's anthem of teenage alienation will haveyou busting moves in your bedroom and singing along to the stadium rock chorus for days! It might not be 1982 anymore, but FM St. Jude's incendiary vision is almost more relevant today than ever!

Gang War rises from the ashes March 24th, but you can listen to "Boy, You're Not From Here" now!