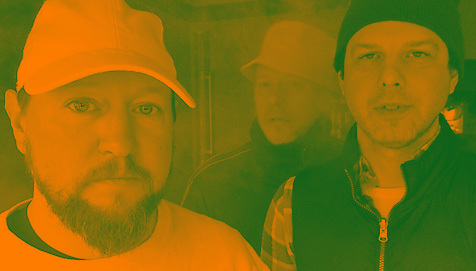 DEAD RIDER ARE ROARIN' DOWN YOUR TRAIL AT 45 RPM!

With glints mirroring off their gun-metal blue fenders, Dead Rider aim for the horizon! After scorching the earth with 2014's Chills on Glass (a best-of-the-year qualifier on more lists than we could count at the end of the year---by the way, what comes after three?), Chicago's finest return to throw a pair of new songs to into the public's yearning maw. This is Dead Rider, though; these songs aren't benign, "give the people what they want"-type fare, no man!

On this little record, Dead Rider speculatively examine potential futures, Black Mirror-style! Side A considers the late night thoughts of the insomniac, as he contemplates the endless parade of humanity who've passed through the very room in which he's trying fruitlessly to sleep. How many of them were there? They who laid in this exact spot? Stared up at that exact crack? As sheets of black guitar reign all around, these are the thoughts you might have--when you are facing a "New End".
The B-side features a post-apocalyptic B-boy trying to fight off boredom and a bellyache. And that's enough said--the collapsed civilization has left only broken beats, hot magnetic pulses of rhythm and scraps of raps. It can get a bit "Uncomfy".

But wait, there's more! The frontier spans far and wide, and Dead Rider are settling in to do what they do best - ride full throttle on a mini-tour of the Midwest.  When you see them again, high times will be in store my friends. High times indeed.