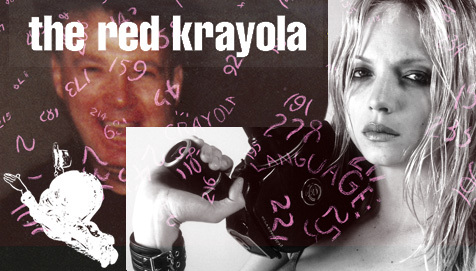 THE RED KRAYOLA GETS THEIR GROOVES BACK

Red Krayola fans the world over! The years keep on turning and you keep getting younger - how do you do it? Ah, it's the fact that there are always more of you with the decades that roll on, with new fans being born every day, yes? Yes. The Krayola catalog is vast, however, and while popping in at any one particular entry point yields incredible reward, it's likely that certain devastatingly exciting titles have circumvented your radar screen (and then your desk top, now tablet, cellular device, etc. - let alone your turntable) within those decades. Insofar as vinyl is relevant again (and whoever said it wasn't, fool?), it's now time to revisit four hot titles from last century that are sure to be useful to listeners in this century!

Getting started, Corrected Slogans was first pressed by The Red Crayola with Art & Language in 1976 and was the first mention of The Red Crayola's name since 1968! It marked the beginning of Jesse Chamberlain as full time collaborator with Mayo Thompson, a run that would last 5 years, and was an album which received one known review - from Interview magazine, who were reasonably perplexed enough to ponder the album's sincerity. You be the judge! Black Snakes was issued in '83 as a co-release between Switzerland's Rec Rec and Germany's Pure Freunde labels. This particular line-up found the group joined by Pere Ubu's Allen Ravenstine, yet it's absolutely Mayo's guitar that shines in this particular configuration. Malefactor, Ade comes next, originally released on Glass Records in 1989, the first utterance of the Crayola in 5 years. The fearlessness with which genres are converted can be disarming, but stick to it — you’ll ﬁnd listening an utter triumph. "Amor and Language" was released in 1995 via yours truly, Drag City yeah, at a time when Mayo Thompson had recently returned to the USA and begun recording at a prolific rate (the era of S/T and Hazel). Curiously, it's sonics alarmed the pressing plant enough to wonder if there were imperfections in the master. Huh? Anyway, a good 20 years puts these essential albums in serious perspective: hindsight is 20/20, and looking back at these C/Krayola masterworks, we're seeing gold! Don't wait a minute, comrade - officially set for April 21st release, go ahead and preorder your LP copies of Corrected Slogans, Black Snakes, Malefactor, Ade, and "Amor and Language" today!