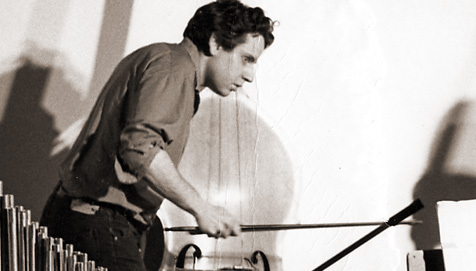 New York, early 80's, very early. Studio 54 is hosted by a hologram, the Mudd Club is already an institution, and The Clash's ﬁrst appearance in New York is in a giant casino, with a full-sized Zeppelin at the door. Not exactly a receptive pond for the next wave of adventurous music. Some names did pop up, harkening to a past of lofts and all-night concert events. In the late 60s and early 70s, Philip Glass, Tony Conrad, along with John Cale and LaMonte Young, Terry Riley and others were closing the gap between that blissed-out eternal mantra and the side door of rock.

By the late 80's most of it had been forgotten, including one amazing character, Arnold Dreyblatt. Dreyblatt only had one record, Nodal Excitation (on the mostly post-AACM jazz label India Navigation), before he packed and moved to Berlin, where he concentrated on his other activities, making only two more records over the next 10 years. But for those who caught the action, Arnold was the man. He was more rock that any of the others combined, and he was also the only one to really tap into that massive proto-minimal sound that Conrad had squelched out of his tin-contact mic violin in the early 60s. He got interested in long string sounds, and bought a bass that he wired with piano wire. By hitting the strings instead of bowing them, Dreyblatt was able to get those ringing overtones, but he also had added something new: pure rhythm.

In 1998, dexter's cigar were on the scene, excavating the valuable stuff from that semi-recent past for Nodal Excitation's ﬁrst-ever appearance on CD. It brought it into a lot of new ears - but times have changed and so have the ears. So what you have here is the ﬁrst-ever LP reissue of Arnold Dreyblatt's freshman record, a slice of minimal history that is STILL as potent now, if not more, as it was in '98 and '81 before it. It was a lighthouse that was aiming the wrong way when the tugboat came by, but now it's shining right in your face. Preorder Nodal Excitation on LP, now!

Artists in this story: Arnold Dreyblatt