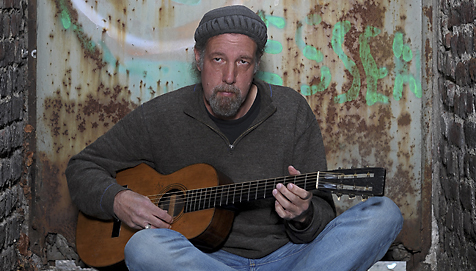 Sir Richard Bishop has been on the road for weeks now, rippling waves of guitar freedom outward and into the ear-chasms of human beings (and likely some extra-terrestrials among us - you know who you are) across these United States like his hair's ablaze! With fresh copies of Tangier Sessions (fire retardant, of course) flying from the merch table, Sir Rick takes no prisoners in the club, leaving even the most casual listener bedazzled by what critics have called his "jewel-like solo guitar virtuosity." All that with a guitar shrouded in mystery, one which literally haunted him into acquiring it? Yes, ma'am! An instrument so beguiling that it lures it's play-mate to find it might be smashed to bits by some for fear of terrorism, but this particular guitar's symbiosis with Bishop is so involved, we're certain it will be pried from SRB's cold, dead hands before anyone gets a crack at it. If you haven't seen the two together, some of you U.S. citizens still have a chance in Texas, Arizona, and on the West Coast. Beyond that, it's time to say, "so long, America!" and announce the first official Sir Richard Bishop European Tour of 2015. What sort of spell will Sir Richard and his ancient parlor guitar cast upon the people of ye olde world? It's impossible to say for sure! The only certainty is knowing it will be a wild, fretboard-bending ride, and if you miss it, you're fucked!