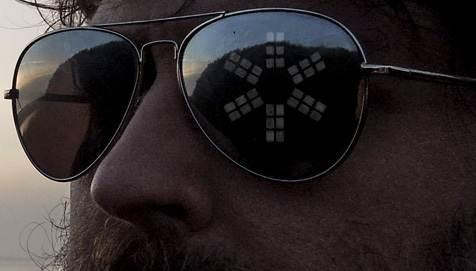 Six Organs of Admittance waxed Hexadic on audiences all across America earlier this spring; now it's time to make it come alive Over There! Commencing June 10th, Ben Chasny and Co. make their Hexadic debut outside of North America, delivering some of the most intense(ly pleasing) Six Organs music ever constructed. Most of these dates will occur in the United Kingdom, book-ended by two indelibly special, first-of-their-kind (for 6OOA!) events. See, the newly released album, Hexadic, is one in which Six O utilized a combinatorial system of his own creation - you guessed it, The Hexadic System - to guide the compositon of music and lyrics. With something so detailed and nuanced as The Hexadic System, it was nearly mandatory to write a book describing how it works, how it can be utilized for composition and other practices (including games!), and it's influences and references, which is exactly what Chasny did! The Hexadic System book is for the casual and curious alike - working with philosophical ideas laid forth by Gaston Bachelard, occultist Heinrick Cornelius Agrippa and others, it is applied to the guitar using a basic deck of playing cards. So in addition to performing at Supersonic Festival on June 13th, the Six O'riginator will also lead a hands-on workshop while there demonstrating how and why others can learn to use the Hexadic System.  Similarly, a two day residency at Cafe Oto will include performance, instruction, lecture, and gawd-knows-what. Sky wizards? You'll just have to be there to find out, won't you?

Ever evolving, Six Organs of Admittance's latest turn is possibly its greatest achievement yet, making these Hexadic shows and workshops essential for all those within pilgramaging distance. The rest of us will have to go about it the old fashioned way, and let our fingers do the work - by purchasing the Hexadic album, Hexadic book, and special Hexadic deck of playing cards! As some already have....god bless the indomitable human spirit!