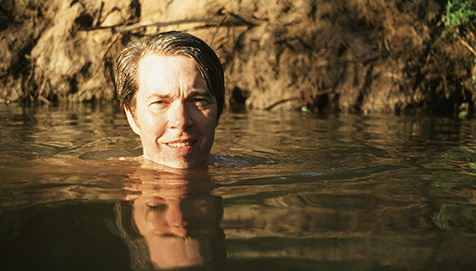 Oh, WE'LL show you a hero! Let's talk about Bill Callahan, drover in the true American maverick tradition! Over the years, his music has grown from sparse heart made-and-homefelt expressions into its epic present state of deft and lustrous compositions and back again! His nuanced baritone vocals exude a careful soulfulness that allows for  loss, love and all the other ambiguities in the stretch of a single song. Bill's plain-spoken delivery is the exquisite center of his gift, transcending our concepts of songs to provide us with pure moments. And yet - his music is deeply rooted in the earth; his rolling tones echoing a spirit that has visited us all. Live performances of the records take the completion of the produced material and slowly ramp up the emotions into overwhelming swells with the audience! So if you're in the heart of Texas at the end of this month, it's only natural for you to join audiences in Fort Worth and Driftwood to see two BIG Bill Callahan shows. And since the lone-star state is his adopted HOME-star state, we expect the performances to be the kind you can ONLY get in Texas. Taking it to an entirely other level, the Driftwood show will be performed out of doors - placing the panorama of Bill Callahan's songs and sounds against the expansive backdrop of the Texas sky.

The breeze that sweeps you off your feet and keeps returning, that's Bill Callahan. That subtle slant of sunlight that shoots through the heart? Bill Callahan knows its name. Hazy August nights where the sound meets the sky: that sounds like Bill Callahan! Check out the dates below and experience a flawless conclusion to your summer 2015!