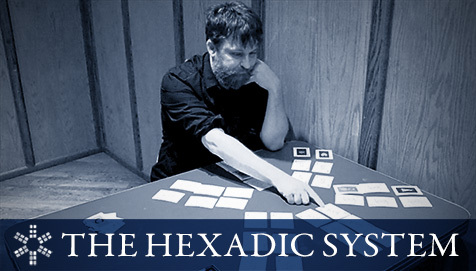 Originated as a personal process to combat his own native guitar playing instincts, Ben Chasny's concepts have morphed into a system of composition that approaches the guitar seeking surprise and transcendence in random tonal relationships, touching on musical and philosophical inspirations that have existed for thousands of years. Six Organs of Admitance's Hexadic release this past February utilized the Hexadic System in its composition, execution and production, and since then Ben has toured the US and Europe in support of not only the album, but also The Hexadic System book as well. Several workshops conducted in the UK were particularly successful, so now the second Hexadic wave is being launched in the US!

Starting this weekend, Ben's back on the Pacific Coast, traveling to several cities where he'll be giving Hexadic book talks at local bookstores by day, then playing acoustic 6OOA shows by night. If you're not a Coaster and you can't make the air-fare, fear not! A video has been created that illuminates the principles of the System, including basic explanations, demonstrations using a pack of playing cards to compose, and even guitar games that can  be played using the System! The truth can be glimpsed at last, as Ben deals out the Hexadic diagram, "a machine for composition." His goals for the use of System are touched upon also, as well as the occult/poetic part of his vision. Five minutes isn't much time, but it'll surely be a start for those interested in leading ideas involving philosophy, music and, best of all, the guitar!

Of course, the folks who CAN make it out to the talks and shows will get a deeper experience of the incredible Hexadic System - and we intend to get more talks and shows around the planet before the year is through! Here, however, are the venues where Six Organs will be playing shows, and the shops where Ben will be giving talks in August!